Journeying through historical sights and visiting Cuba’s LGBTQ community…here is Part II of our Cuba series.

Each new day brought with it new excitement and wonder.  We stopped in the Plaza de Revolución; the focal point of the Cuban government and one of the largest city squares in the world.  At 77,000 square feet, the Plaza has been the site of many political rallies, and it’s where Pope Francis famously held mass in 2015.  It’s two steel memorials, featuring two of the most important heroes of the Cuban Revolution, Che Guevara and Camilo Cienfuego, is one of the country’s most iconic images.

We traveled through Fidel’s childhood neighborhood, and ate lunch in a restaurant with his son at the table behind us.  Speaking with some locals, we learned about Cuba’s churches, and how many of them are considered “sanctuary locations.”  Places where groups meet in secret to discuss the hardships of communism while plotting its demise.

We passed pockets of revolutionary groups gathering on street corners and proselytizing communism at the top of their lungs, as they waved pro-socialist literature in the air.  They’re called CDR Watchers (Committees for the Defense of the Revolution), and their job is to remain vigilant and vocal, while spying on their neighbors…looking for those who oppose authoritarian rule.

By mid-week we’d talked with dozens of people on a wide range of issues.  History, art, food, weather, and the importance of smoking a good cigar.  As well as politics…an often times jailable offense should the conversation happen to spill into the wrong ears. 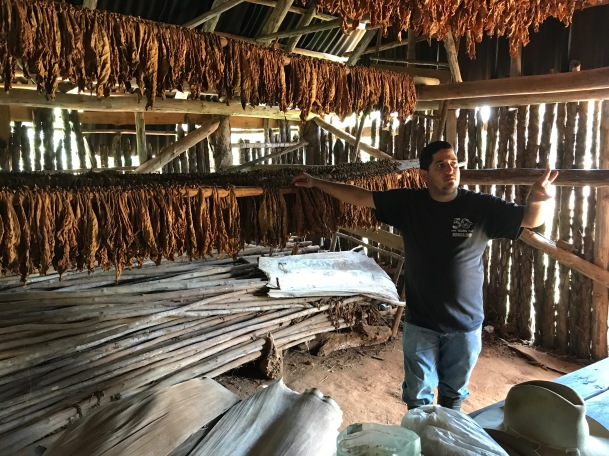 And while life on an isolated Communist island is hard enough, being gay and living there presents an entirely new set of challenges.  Maintaining an LGBTQ lifestyle in Cuba isn’t an illegal offense, but it is offensive in the eyes of the government.  We witnessed it on our last night in Havana.

On the other side of Chinatown is a bar called, Cabaret Las Vegas.  We’d read about it earlier in the week, as we trudged along on the government-monitored-wifi-hotspot we’d picked up on in the park.

Las Vegas boasted the biggest drag show, in the biggest gay section of Havana. The term “big” is relative, as the “section” was nothing more than a corner with a bar, restaurant, pizza shop, and the club at the opposite end.  Big or not, it was a popular spot.  Hundreds of people gathered along the sidewalks, laughing and dancing to the muffled sounds of different disco tracks, all blending together from the four locations.  It was a festive party in the street…a mini Mardi Gras, where beads had been replaced with slices of pizza and Caipirinha’s.  Just under the surface, however, a germ of danger was waiting to be exposed. 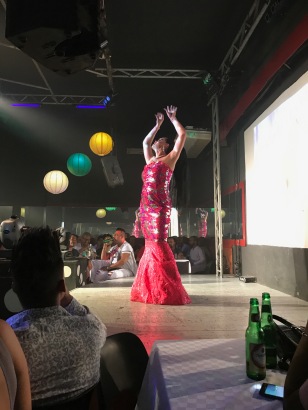 Standing at the door to Las Vegas was a gaunt young man in a ripped white shirt, with skinny white jeans and worn out white Converse sneakers.  He reminded me of an emaciated John Lennon walking across Abbey Road.  Although, his hair and height was considerably shorter.

“We don’t open for another hour.”  He said.  Looking at my watch it was nearly midnight.  We asked if there someplace to get a drink.  Someplace other than the crowded spots on the corner.  “Follow me.”  He said, as he left his post at the door.

Walking 10 feet in front he asked us to stay behind.  “It’s better not to draw attention.”  He said.  “I’ll go first.  You follow.  We’ll meet at a table once we get inside.”

Our new friend entered the coffee shop, briskly brushing past a police officer who was arguing with 3 teenage girls standing on the steps of the shop.  The girls wore matching knee-high denim miniskirts, and shared a terrified look on their face.

We entered the shop thirty seconds behind the mysterious man in white, who had secured us a table.  Gesturing with both hands, he offered us a seat in the remaining two chairs.  It was all very covert.

“What’s the story with the girls outside?”  We asked.

“They’re waiting to get into the club and the police don’t like the way they’re dressed.”  He replied.

“And the police don’t want us talking to tourists.  That’s why I needed to walk ahead of you.”

Through sad brown eyes that stared right through us, he began his story.  His name was Martez; 33-years old, soft spoken, and recently released from prison, having spent 12 years of a 15-year sentence.  His crime; selling Marijuana cigarettes.  Although, his real crime, he told us, was being gay.  Martez had never left the island and his parents had never clued in on his lifestyle.

“It was easy.  I’ve spent half my life in jail.  They never visited.  They never paid attention to me before that.  I don’t have a relationship with them.”  He said.

His words lacked any form of empathy.

We talked about the Pulse shooting in Orlando and asked what the communities response was.  “What’s Pulse?”  he asked?   An asteroid could be hurling towards us with only a few days of human life remaining.   And while the entirety of the world’s population braced for impact, Martez and his friends would be going about their normal routine.  Closed off from all things news and all things social media.   And for a moment his unplugged world seemed comfortable enough.

“Behind you.  Quick!”  Martez said, motioning with his head.  Outside the three young girls had apparently lost the argument with the police office and were being placed in the back of his car.

Finishing our drinks, we made our way to the Cabaret, as Martez resumed his spot – 10 feet ahead of us. 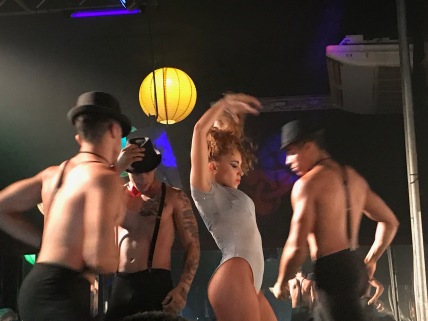 By the end of the trip we’d met people who were happy, content, frustrated, scared, and downright angry.  And while the political spectrum ran from one extreme to the other, the one thing everyone had in common, was the struggle.  Whether for freedom with capitalistic independence, or communist state-run assistance, everyone was aware of the restrictions and poverty that surrounded them.

And while there’s much to envy about the wealth the rest of the world has, many Cubans we met were mindful of what else those foreign countries endure:  a populous with soaring education debt, low literacy rates, homelessness, out of control gun violence, and a health care system in disarray.  Those things are available in Cuba.  Everyone can go to college.  In fact, many Cubans have multiple degrees.  Crime is barely visible and health care is available to everyone.  And while it seems the younger generation appreciates those benefits, those we met were fully aware of the toll it is taking on them and their country.

Beauty permeates Cuba like flowers poking through a rusted metal fence.  We found it in  music, food, culture, architecture, and most of all her people.  People equipped to live a life, but forced to do so in a controlled and confined space.  Traveling is about understanding cultures and embracing the unknown.  We were fortunate to have been able to take advantage of president Obama’s easing of Cuban/American relations.  Now, with the new administration’s policy rollbacks, it’s anyone’s guess as to how those relations will be impacted.