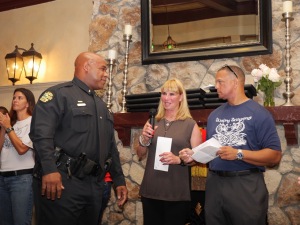 A few weeks ago Dueling Dragons, a Central Florida nonprofit designed to build positive relationships between law enforcement and at-risk kids through the sport of Dragon Boating, held their Annual FundRaiser.

Recently, Newschannel 13’s Ed Heiland spoke with Andrea about her organization. “Police officers and inner-city kids are usually not a team,” Eliscu told him. “And we put them together in a boat and say, ‘Let’s work together and see what happens.’ Nobody wants to see another Ferguson, another Trayvon Martin, another Madison Wisconsin. So, if you can change and create a relationship — if you can change some of that profiling.”

Steve Gunter owner of the Historic Dubsdread’s Tap Room, hosted the event as a donor himself.  Teen paddlers and their paddling cop-teammates mixed with the nearly 100 guests who enjoyed a silent auction: which included a weekend at the Hyatt in Clearwater, Sapphire and Gold earrings designed by Lauren Sigman Jewelry, and a painting of love by nationally acclaimed artist Donna Dowless.  Raffle items included a round of golf, a putter, and a golf bag.  Packages such as, Ride-With-A-Cop & Spend-½-Day-With-SWAT-Team-Training were offered.  As were purses, gift baskets and women’s jewelry. 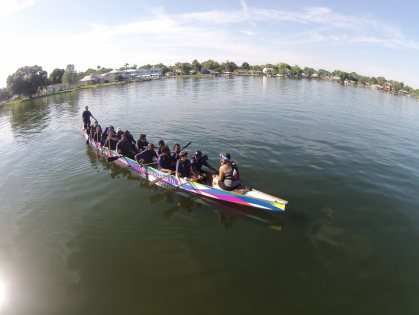 If you’re looking to Just DO Something…Anything! to help improve relations with teens and law enforcement, discover this Orlando Police Officers and Local Teens organization.  Dueling Dragons builds trust and helps these two groups grow together in a positive setting through a common experience. Officers and teens become mentors and friends throughout each ten-month season…while generational changes emerge as lasting bonds are made in the community.

To find out more about Dueling Dragons and how you can help, click here: duelingdragonsorlando.com/donate.html

FROM CNN: The True Cost, a new documentary, chronicles the evils of the clothing industry and asks us to stop buying so much cheap stuff.

We buy too many clothes, and we pay too little for them.

That’s the message of “The True Cost,” a new documentary on the perils of the fashion industry, which is being released next week.

The film is a sweeping, heartbreaking and damning survey of the clothing economy. It covers malformed children of pesticide sprayers in India’s cotton belt, gruesome shots of the deadly 2013 Rana Plaza factory collapse in Bangladesh, Indian rivers frothing with chemicals, and mountains of discarded clothing in Haiti.  “I believe these clothes are produced by our blood,” Shima Akhter, a Bangladeshi factory worker, says in the film. “I want the [factory owners] to be aware and look out for us, so that no more mothers lose their kids like that.”

The film interviews a factory owner in Bangladesh, who says the constant pressure to produce cheaply is partly responsible for the unsafe conditions.

“Is it really ethical to buy a T-shirt for $5, or a pair of jeans for $20?” asks Livia Firth, creative director at the sustainable businesses consultancy Eco-Age.

Related: Out of a tragedy, socially responsible fashion

The movie is filled with disturbing facts. Here’s a few:

— 250,000 Indian cotton farmers have killed themselves in the last 15 years, partly as a result of going into debt to buy genetically modified cotton seeds.

— There are 80 billion pieces of clothing purchased worldwide each year, up 400% from two decades ago.

— Only 10% of the clothes people donate to thrift stores get sold — the rest end up in landfills or flood markets in developing countries.

“I came into this completely blind,” Director Andrew Morgan said at a press screening Friday. “I never thought twice about a piece of clothing I wore.”

Morgan said a photo of children — who were close in age to his own kids — hunting for loved ones near the Rana Plaza rubble is what spurred him to make the film.

He said systematic changes are needed in this and other industries, chief among them counting the costs of pollution or unsafe working conditions that are not currently factored into the price of goods.

But for now, he urges consumers to opt off the treadmill of purchasing more and more cheap clothing — what’s being referred to as “fast fashion” — and buy fewer, better-made items.

“Let’s back off this endless, constant purchasing and invest in clothes we love,” he said.

The Moonlight Fund, founded in 1998 with the purpose of providing services to burn victims and their families, was started by fellow burn survivors, Henry Coffeen lll and Celia Belt.

Their organization was established during the first Gulf war, where they quickly realized the need to expand their efforts to include all those military injuries that were caused by blasts.  Many, of which, resulted in amputations. 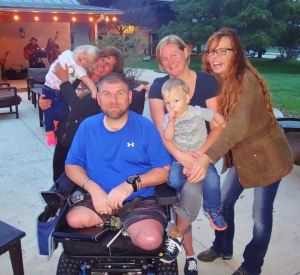 For the past 18 years, Moonlight Fund has helped nearly 500 people each year in Texas alone.  They’ve received calls from across the U.S. from both civilian and military survivors in need of help: providing emotional, financial and in-kind assistance from the onset of the injury, through rehabilitation and into their new lives.

Moonlight Fund also offers healing retreats.  Held in the peaceful surroundings of the Texas Hill Country, these retreats provide a safe place for survivors to enjoy their family and speak openly about their struggles.   With specially designed activities, attendees are afforded opportunities to make new friends dealing with many of the same issues.

In 2012 Moonlight Fund was chosen as the top non-profit in the country by the Fisher House / Newman’s Own Foundation. Specifically because of their retreat program and their ability to offer numerous services and programs with low overhead, and at no cost to those they serve.

The Moonlight Fund has received many awards over the past 18 years, but it’s their care of others they’re most proud of. 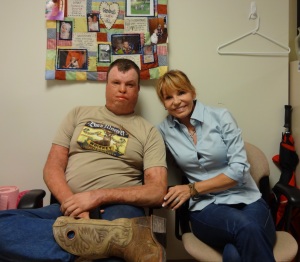 To learn more about Moonlight Fund, or to get involved please visit their site – http://www.moonlightfund.org

Seeing a homeless man inside a Waffle House in Prattville, Alabama, encouraged one little boy to respond — with kindness.

Soon after the man entered the restaurant, Josiah Duncan, 5, began asking his mom questions about what it means to be homeless. But his mother, Ava Faulk, told WSFA that there was one issue in particular that really seemed to upset the boy: the lack of food.

So Josiah urged her to buy the man a meal.

“He came in and sat down, and nobody really waited on him,” Faulk told the station. “So Josiah jumped up and asked him if he needed a menu because you can’t order without one.”

The news station has a photo of the boy talking to the man at his table, and the image has now been shared on social media around the world: 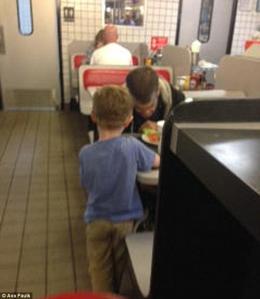 Unsure of just how far the family’s generosity extended, the man tried to order a cheap burger. And when the man was told to order anything, he asked if he could have bacon.

“I told him get as much bacon you want,” Faulk told WSFA.

Before they could eat their meal, Josiah decided to sing a prayer.

“The man cried. I cried. Everybody cried,” Faulk told the station.

“Watching my son touch the 11 people in that Waffle House tonight will be forever one of the greatest accomplishments as a parent I’ll ever get to witness,” she said.